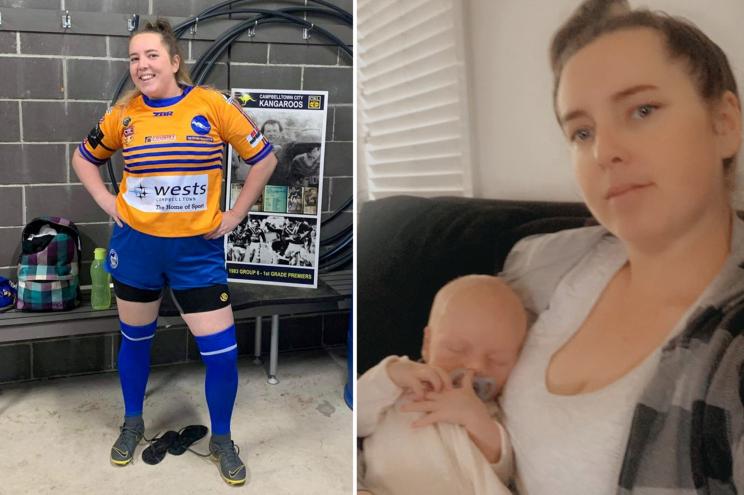 Dimitty Bonnet, an Australian mom of two, had no idea she was pregnant until she felt the sudden urge to push in the shower and caught her newborn.

A woman got the shock of her life when she gave birth alone in the shower – having had no idea she was pregnant.

Dimitty Bonnet, 28, who was already a mum-of-two, had given up hopes of having another child and was left utterly dumbfounded when she felt the sudden urge to push while in the shower – catching the baby’s head between her legs.

Dimitty and husband, Jason, 42, a signwriter – who are parents to Nate, five, and Darci, three – thought that their family was complete and had stopped trying to have any more children.

Dimitty, from Campbelltown, New South Wales, Australia, had regular periods and had even done a negative pregnancy test a few weeks before the surprise birth at 1:30 a.m. on 26th February 2022.

Her husband was in bed at the time, and as she called out for help he rushed into the bathroom to find his wife covered in blood and holding a baby.

She had no idea that anything was wrong until she started to feel ‘a bit off’ the evening before she gave birth.

“My weight has fluctuated my whole life, so I didn’t think anything of it when I put on a few pounds,” said admin manager Dimitty.

“I assumed it was just a bit of lockdown weight, and it was nothing too noticeable.”

“I’d flown on a plane a month before, and even had an x-ray after a rugby injury six weeks before I gave birth.

“There was no part of me that thought I could be expecting – to be sure I even took a test a month before giving birth and it came back negative.

She notes that the evening before her son was born, her stomach felt a “bit off,” so she put the kids to bed and got an early night.

“I woke up around 1 a.m., and felt so uncomfortable,” she recalled. “It was like I really needed the toilet, but I wasn’t able to go.

“The pain started to get worse, so I decided to have a shower to make myself feel better.

“I didn’t want to wake my husband, so I kept the light off and showered in the dark.

“I felt a sudden urge to push, and the next thing I knew, I was holding a baby’s head.”

In a state of shock and confusion, Dimitty managed to sit down on the floor in the dark, and after a final push, her baby was born in the early hours of February 26th, 2022.

She called for her husband, Jason, who rushed into the bathroom and was shocked to find his wife cradling their newborn son.

The panicked pair called for an ambulance, which arrived around 15 minutes later – just in time to help Dimitty deliver the placenta.

After the paramedics cut the cord and made sure that mum and baby were okay, they took the family to Campbelltown Hospital, New South Wales, where the pair were monitored for 24 hours.

Whilst Dimitty was in the hospital, they facetimed Nate and Darci, telling them that ‘”Mummy has a surprise” before showing them their new sibling.

“It was such a huge shock that the first few days are a bit of a blur,” Dimitty explained.

“My older kids were so excited when we told them, particularly my daughter as she’s always wanted to be a big sister. She’s so caring and has taken on her new role really well.

“Our family and friends have all been so supportive as we weren’t prepared at all – in fact, we’d thrown away all our old baby stuff a month before.

“But everyone came together to make sure we had a pram, clothes, nappies, and a bed for him.

“It took us about 24 hours to come up with a name for him, but we chose Harvey after Jason’s grandfather, which is really special.

“He’s such an amazing baby and we feel so lucky to have him join the family, even if it was quite a shock at first.”

This story originally appeared on The Sun and has been reproduced here with permission.

The heroine dog saved the life of a baby
2022-05-10 0 Comments
The situation that will be discussed in this article occurred in one of the states of Brazil. This case once...

HOW TO SUPPLEMENT NUTRITION FOR MOMS PROPERLY AND EFFICIENTLY?
2020-08-27 0 Comments
Nutrition before and during pregnancy plays an important role in the health of moms as well as the development of...
Tabbed Widget