All parents rejoice at the first successes of their baby, but the family from the UK never ceases to be amazed at the capabilities of their 15-week-old daughter, Lula. Lula began to hold her head a few days after birth, and at two months, she was already firmly on her feet. Everyone around is amazed at the strength of the baby, and her father believes that she is motivated by powerlifting competitions, which they watch together on Youtube. 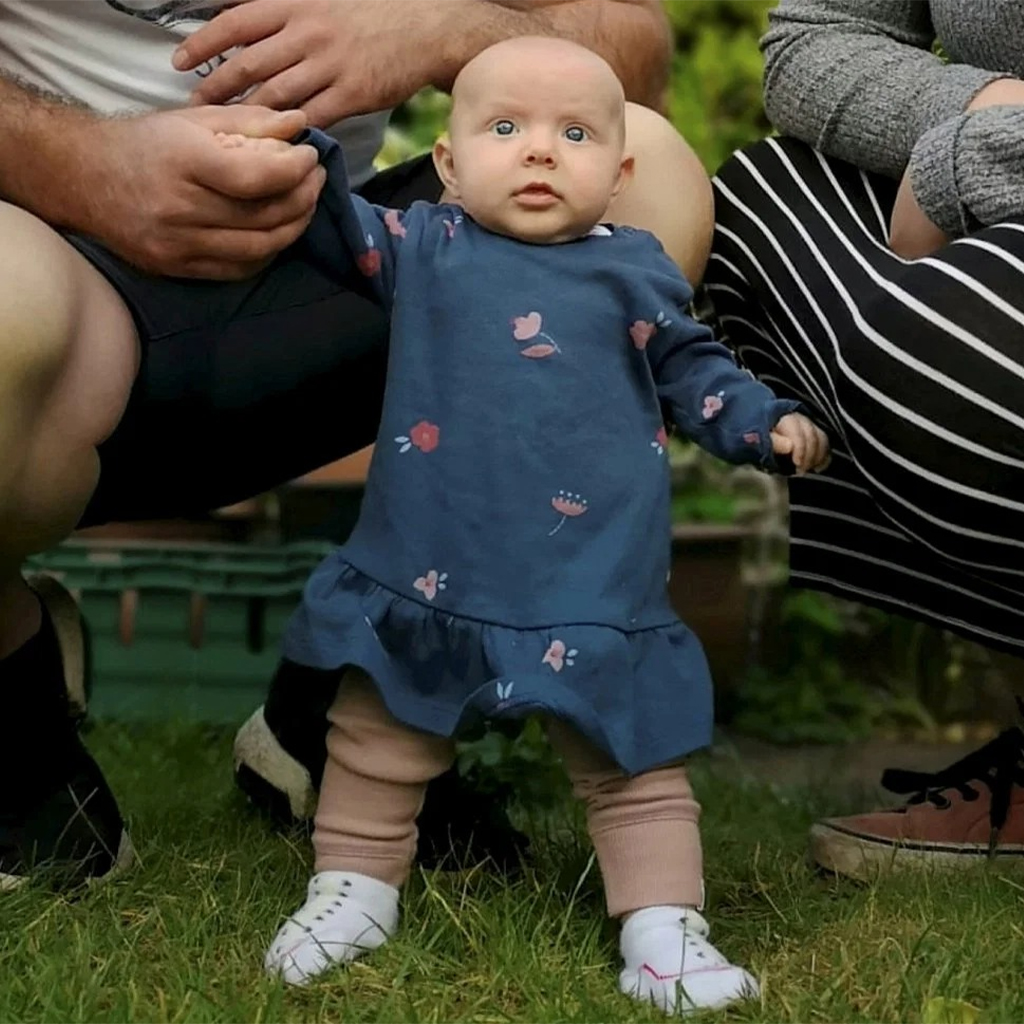 Tezra Finn-Johnston, 31, and his girlfriend, Emily Derrick, 23, noticed their daughter’s unusual strength while leaving the hospital five days after the baby was born. Lula was born on January 31 and weighed 5.5 lbs. Young parents were surprised when the girl began to hold her head even before being discharged from the hospital.

Now the 15-week-old baby can stand on her own two feet without support. 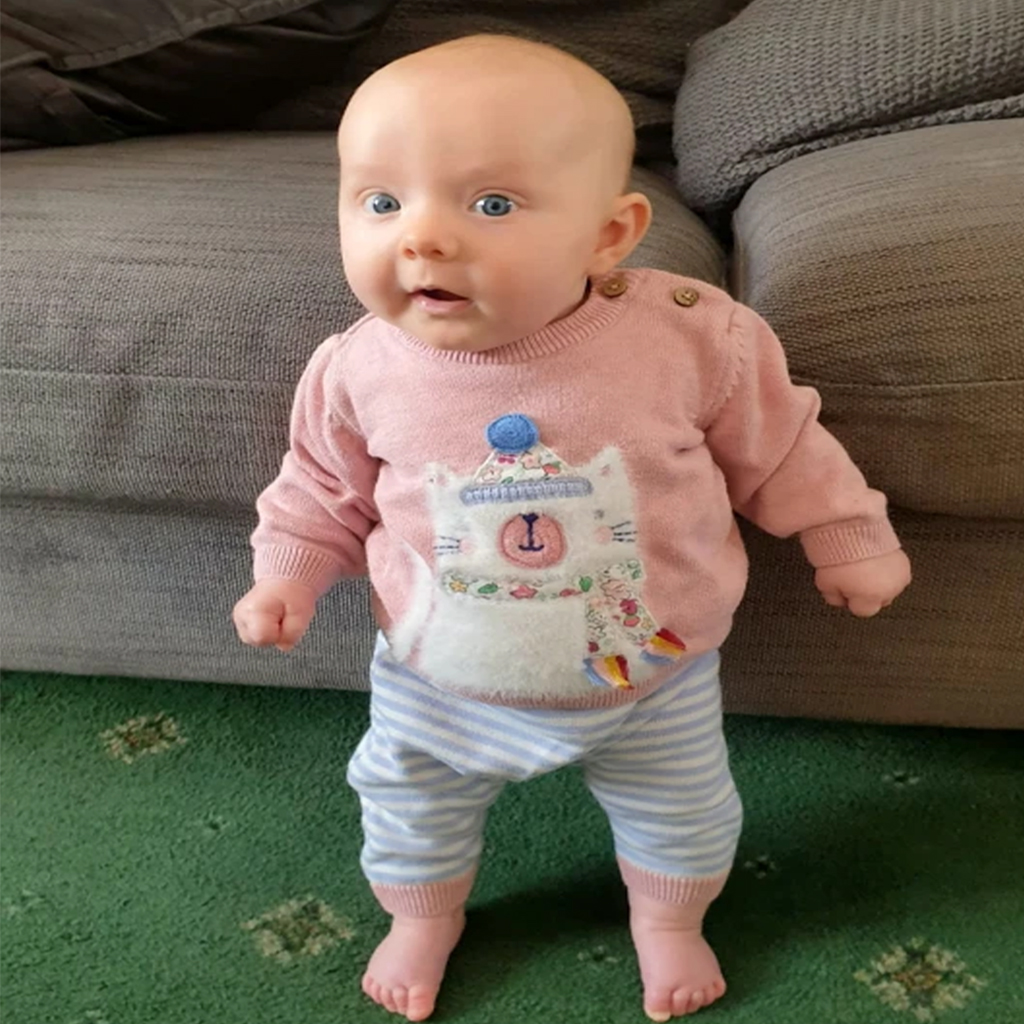 The father jokes that he and his daughter often watched videos of strength competitions on Youtube, and this inspired the bay to demonstrate his strength. 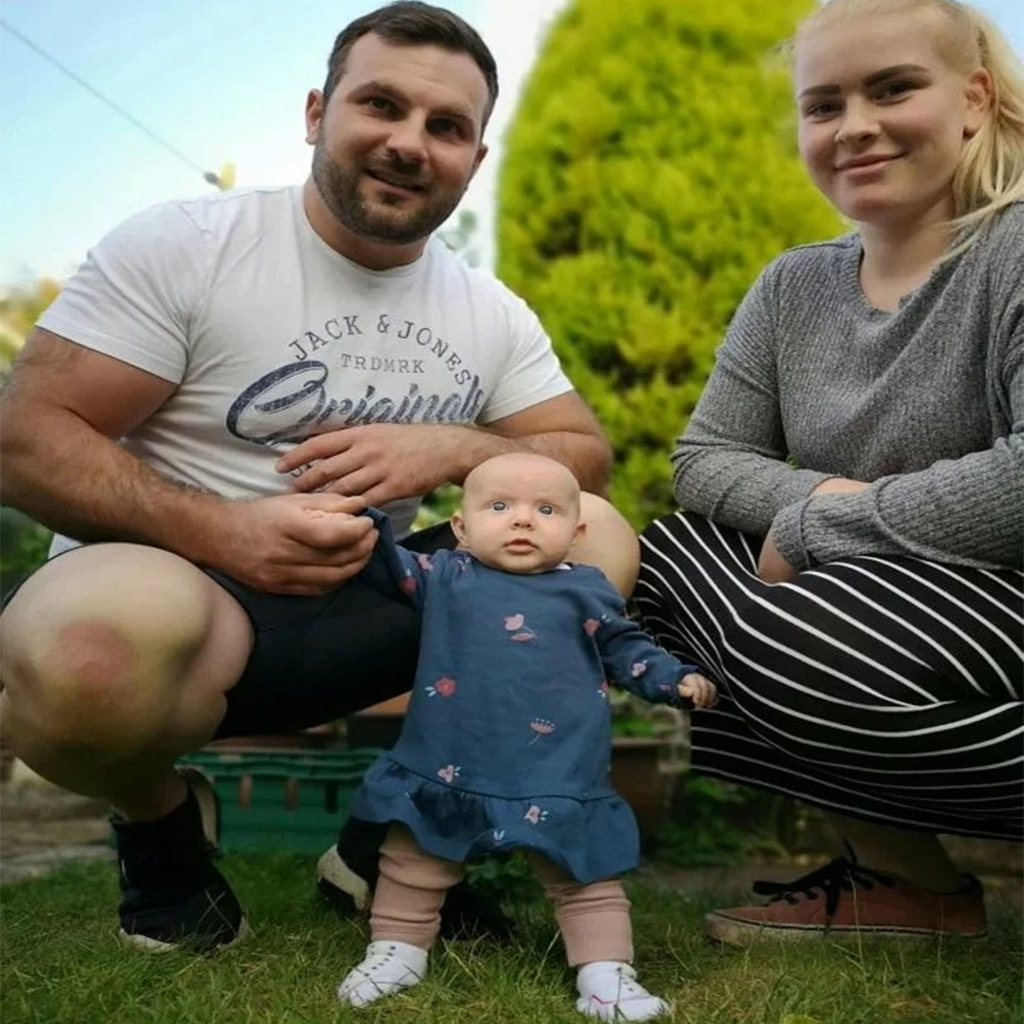 The Bristol couple say Lula started trying to stand up when she was just over a month old. At 8 weeks old, she has already learned to stand on her own. 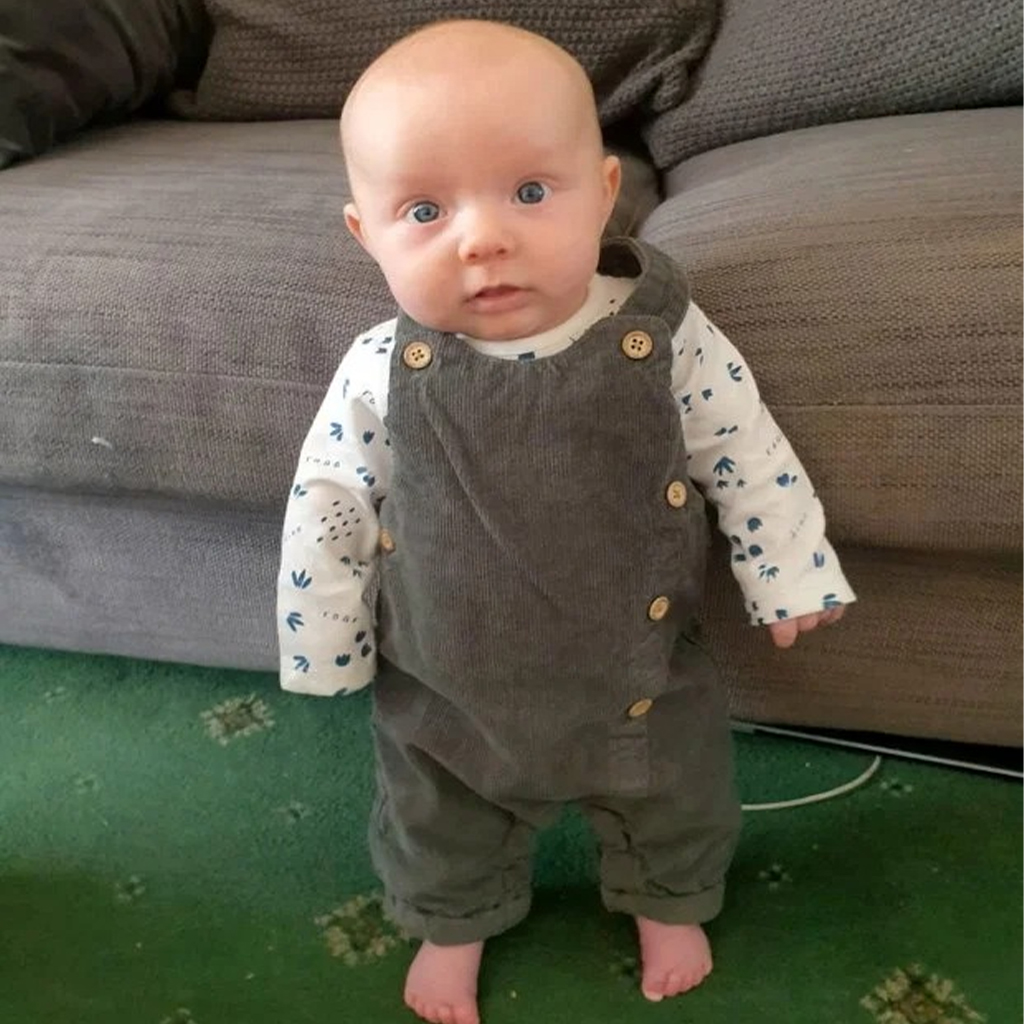 Everyone is surprised at the extraordinary strength of the baby. Tezra and Emily’s parents say they didn’t do anything like this when they were so tiny. Babies usually begin to stand up without support between the ages of 9 and 12 months. 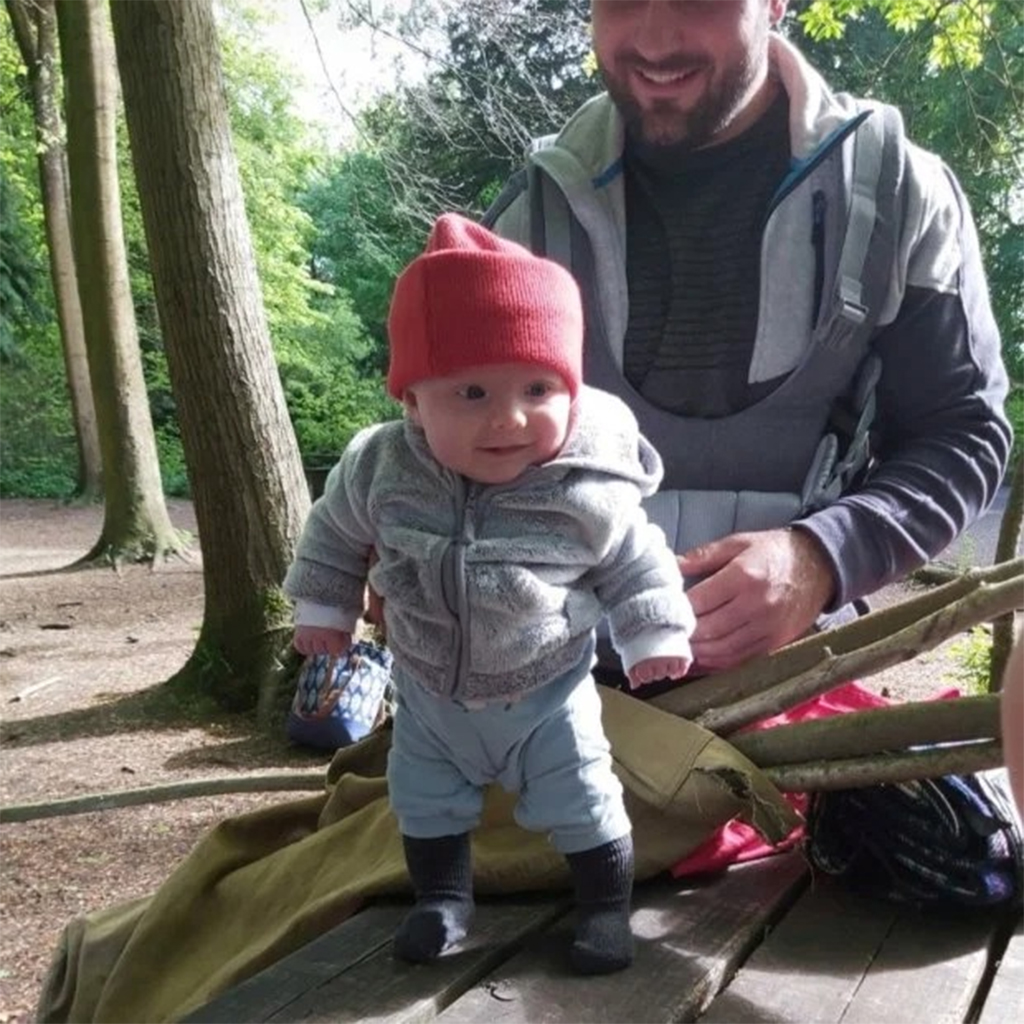 Lula is very happy when she manages to get up and stand on her own feet. The baby’s father believes that she had a good ratio of muscles to body weight due to the fact that she was born small. Tezra himself is fond of weightlifting and says that as a teenager he could already overcome adults.

The girl does not walk yet, but her parents assume that she will take her first steps much earlier than her peers.

A dad whose baby learned to stand at just eight weeks old has joked she may have been inspired by watching him view strongman clips on YouTube.

Tezra Finn-Johnston, 31, and girlfriend Emily Derrick, 23, from Kingswood, Bristol, first noticed their daughter Lula’s strength when they left hospital after her birth.

Even at that early stage she was able to support her own head, they say.

Little Lula was born on 31 January weighing just 5lbs 9oz and was on the fifth percentile, which means she weighed less than 5% of other babies the same age.

Now 15 weeks old, the tot is able to stand unassisted, supporting her own weight. 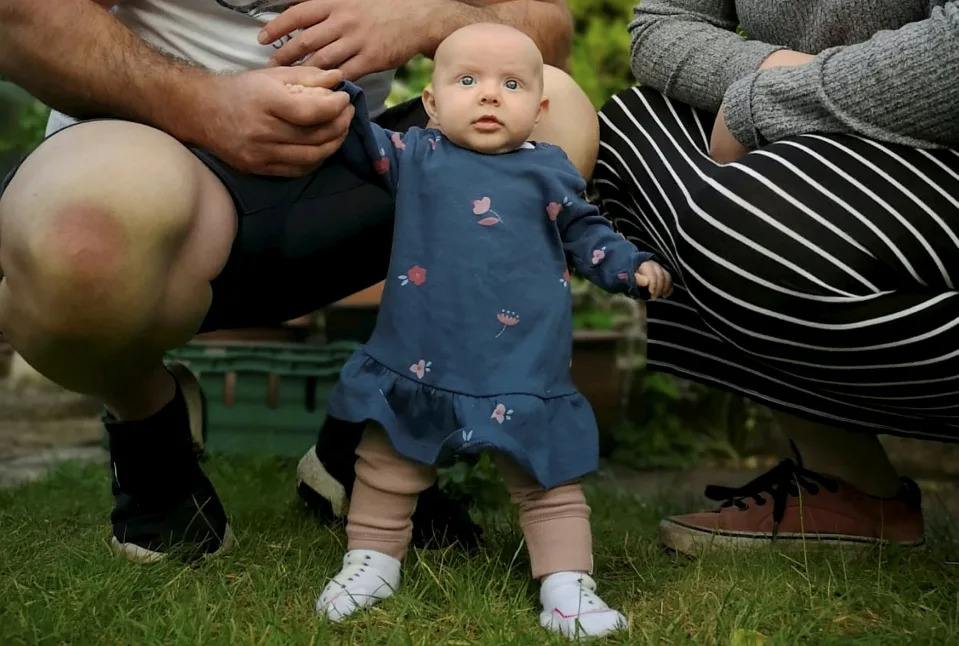 The new dad first spotted his daughter’s unusual leg strength when she was around a month old.

“She was having a tantrum and I tried to sit her on my knee to calm her,” Finn-Johnston says.

“Instead of sitting down, she just stood on my knee and wouldn’t bend her legs.

Finn-Johnston decided to test his theory and after he held and supported his daughter, she managed to take her own weight.

The couple don’t know anyone else with a baby who was able to do any of those things so early.

“Everyone seems to think that it’s unusual that she can hold herself up, even just sitting, let alone standing,” he says.

“From everything I’m reading, it should be about nine months to a year that they should be able to support their own weight.”

The first-time parents originally noticed their daughter seemed unusually strong when they brought her home from the hospital, five days after she was born.

“Pretty much from the day we left hospital she was able to support her head a little bit more than we thought she should be able to,” Finn-Johnston says.

“She was holding it up for a few seconds and that shouldn’t be for a few weeks, but pretty much straight away she was able to do that.

“Then we watched the Babies documentary on Netflix and on there they said babies are inherently programmed to crawl from birth.

“So I put her down on the mat and she was trying to crawl a bit.

“Then I put my arm behind her and she was able to push herself up the mat – propelling herself from my hand with her legs.

“She can also do it lying on her front as well.”

While Finn-Johnston doesn’t recommend people try similar things with their own babies, he believes his daughter enjoys showing off her new skills.

The dad is a big fan of strongman competitions, regularly watching videos on Youtube.

He believes Lula looks engaged when they watch the videos together and jokes she might have been inspired by the clips.

“She sits on my knee and we both watch that, so I like to think she is training herself,” he jokes.

While Lula isn’t able to walk just yet, her parents believe her first steps might be closer than they think.

“She just seems a lot older than she actually is,” her mum says.

When should babies be able to stand?

According to Babycentre UK, babies have the reflexes needed to stand from birth, by bracing their legs against a surface they feel underfoot.

“If you hold your newborn upright on your lap, supporting his head, you’ll feel him trying to use his legs. He’s not trying to walk, it’s just basic instincts kicking in,” the site says.

It goes on to explain that babies legs aren’t nearly strong enough to stand at this age and that the reflex will disappear after a couple of months.

Berkshire Healthcare NHS has produced an early-years toolkit that explains how parents can safely encourage their baby to stand.

“Your child can be held supported in a standing position from an early age,” the toolkit explains.

“This allows the child to experience the feeling of their body weight through their feet.”

The site says babies may bounce up and down, which they do to develop the strength in their leg muscles.

“You can stand your child in many different ways, for example on your lap when you are sitting in a chair, in front of a coffee table or sofa or on the sofa cushion next to you with their back against the back cushions,” the toolkit continues.

“As they get stronger, they will need less support from you and they will use their hands on the furniture to support themselves more.

“When they can stand briefly without holding on, they are ready to learn to step along the furniture or ‘cruise’.”

Why One Twin Was Conceived Naturally, The Other Via I.V.F’