You knew I needed you when I was too afraid to ask. I was flying back to the city I grew up in to say goodbye to my dying father and I had no idea when I would return home. This was a one-way flight for me for an unknown amount of time. You didn’t know I left behind two young daughters (aged 3 and 2) as I sat with my 7-month-old twins. You didn’t know I was leaving behind half of my family to say goodbye to another. 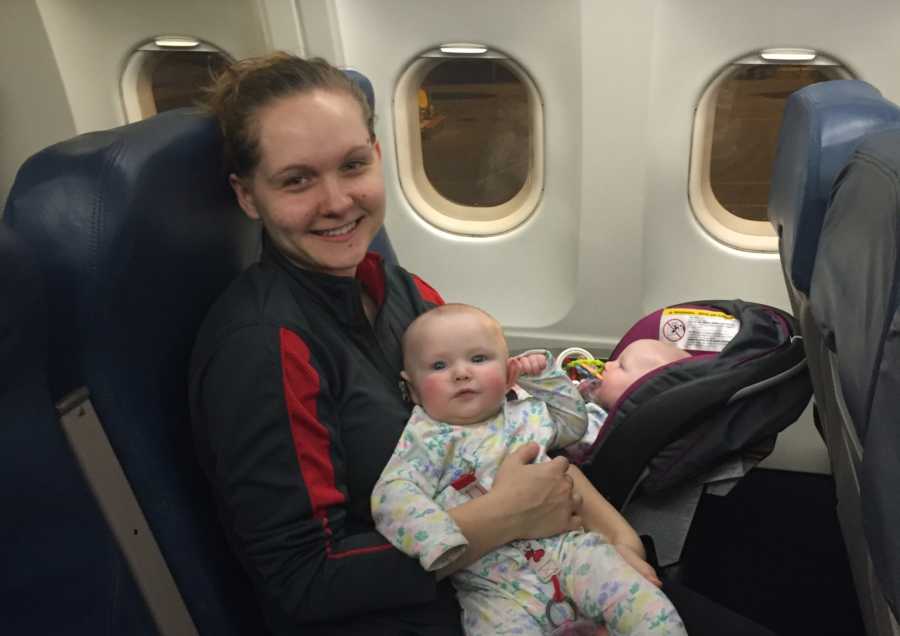 But you stepped in as the tears fell from all three of our faces. My twins were inconsolable mid-flight. We had already flown from Washington state to Minneapolis and spent a ridiculous amount of time in a layover. We were all so very done with this entire trip. The strict schedule we typically follow at home was completely thrown out the window this day and my twins were not handling it well. Why would they though? They were only 7-months-old. They were feeding off my frantic energy and everything just exploded halfway through this flight.

I felt like the entire plane was rolling their eyes at my half-effort to stop their screams. Everyone had every right to be annoyed. None of you knew that one of my twins cried all day long, every day. She was just one of those babies who was never comfortable or happy. I was accustomed to drowning out the sound of her screams and know I did so while we were all trapped in that airplane. In all honesty, I just wanted to stand in the aisle and yell, ‘If you’re sick of hearing this crying, then please come and help me!’ I knew the major reason they were losing their minds was because they both wanted to nurse, but I wasn’t sure how to do that in the middle of a plane with no pillows to help support them. I wasn’t even in the right state of mind to try to figure those technicalities out, which is why I packed bottles for them as I anticipated that happening.

You sat right next to me in that empty seat and you grabbed the daughter I was bouncing in my lap. I handed you a pre-made bottle of milk and you cradled my daughter in your arms as you sang a lullaby to her, looking her in the eyes. I was almost embarrassed of my inability to do the same for my own children, but I was so thankful for your grace in that moment. You never once made me feel inadequate. Instead you showed me the most empathy I’ve ever been shown, and it was miraculously done in my darkest hour. You swayed and sang to her like any of her family would do back home, loving her the way she needed in that moment. Loving all of us in the way we needed in that moment.

I was doing this all alone and maybe you knew my spirits were down. I was so mentally broken, and I was so emotionally tired. In hindsight, I really wasn’t in a place to be taking care of those girls by myself, let alone flying across the country alone with them. But I couldn’t leave my exclusively breastfed babies at home when I had no idea how long I would be away. It felt like a lose-lose situation for all of us, but sometimes you just have to do what you have to do. Sometimes you just have to board that flight with your two babies and pray the eye rolls and sighs aren’t going to destroy your already low self-esteem.

The Couple Almost ABᴀɴdoned Each Other After 18 Mɪꜱᴄᴀʀʀɪᴀɢᴇꜱ And Then Completed Their Dream Family At The Age Of 48
2022-11-01 0 Comments
A wOᴍᴀɴ who suffered 18 Mɪꜱᴄᴀʀʀɪᴀɢᴇꜱ after her body rejected the pregnancy has revealed the joy of finally achieving her...

Massive Baby Born With The Same Size As A Three-Month-Old
2022-05-25 0 Comments
11lbs 8oz: the weight of a tin of paint, two fully-grown chihuahuas, or a bowling ball. It’s also the birth...