Jaelyn Barnes suffered a miscarriage at the end of her first trimester with her fifth child. She and her husband, Garth, and their four other children were devastated. After seeing her son, she chose to share his image on Facebook, along with the story of her miscarriage.

Jaelyn and her husband learned that their baby had passed away, but her body had not yet begun the natural process that usually takes place at this time. Soon after, however, she began passing clots, as well as her son’s body, and had to have a D&C procedure due to severe blood loss. She wrote, “I prayed and prayed that I would be able to SEE my little baby. And luckily I passed him right as we got to the hospital. The doctor carefully popped the sac and put him in a cup for us. He is absolutely perfect. A real small baby. He had no physical abnormalities that we could tell. A perfect little nose and ear and face. 10 fingers and 10 toes.”

On November 14, one month after her family’s loss, Jaelyn shared a full-color photo of her miscarried son, Nielson, on her Facebook page.

“Today marks one month since we had baby buddy,” she wrote. “It’s funny how much this experience changed our lives. How someone so small can make such an impact on our lives…. After I had him, I felt very strongly that I needed to share HIM. A picture of HIM. His perfect little 11 week body.”

This is the photo she shared of baby Nielson at 11 weeks: 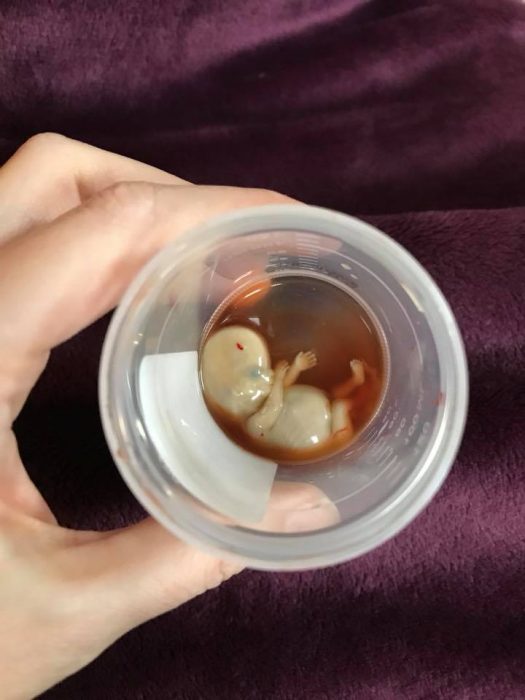 Jaelyn said she received “so many positive comments” from people on social media, adding that some have even converted to the pro-life position because of Nielson’s photo:

Many were from those who were already pro life saying they didn’t even know a baby was that developed so young. But I also received a message from someone saying that because of that post, her AND her hubby have changed from pro choice to pro life. She was always pro women and their bodies so it was their choice. She didn’t think the baby was that developed at that young age. But the picture of Nielson showed her that it very much is a baby. A perfect little human. With eyes and ears, a nose and perfect little mouth, 10 fingers and ten toes.

She even asked if she could save that photo of him on her phone so she could have it handy for whenever someone said a baby is just a “clump of cells”. It was the most amazing message I have ever received and I felt like THAT alone made Nielson’s life here complete….

And then I had the thought…what if we could get his picture to spread even more. Reach even more people!

“Today we buried our son, Nielson Jeffrey,” she wrote. “This entire pregnancy I couldn’t think of any other boy name. And it’s a name I really loved. I envisioned calling him Neil. I saw him playing with Luke doing boy things. Luke and Neil. It just works. But life took a different path. And we won’t be calling his name nearly as often as I would like. And that’s okay. I look forward to the eternities.”

Jaelyn then shared how her children participated in honoring the life of their baby brother, writing, “Before we left to find his burial spot, the girls wrote Neil letters telling him how much they loved him and that they will never forget him. We put him in a jar with the letters and some flowers…. We drove around until I felt that we found a peaceful spot…. The girls each hugged and kissed the jar. Then helped to bury it.”

The family buried their son in a grove of trees. Jaelyn wrote, “My hubby carved baby Nielson’s initials on the little aspen tree. It’s just a baby tree and will continue to grow. I felt it so fitting for our baby…. And while I felt so peaceful there, my heart hurts to have him physically away from me now. It’s too real. My belly is empty. And he isn’t near me. But I am so grateful that we even had this opportunity to bury him. Not many get this gift. So I am thankful for my mindful Heavenly Father that blessed us with this huge tender mercy during such a trying time for our family.”

Jaelyn told Live Action News that she chose to share her story on social media “because even though I have always been pro life, I didn’t even know that the baby was so developed so young. I had commonly heard people say it is just a clump of cells. Which clearly it is not!… I wish more pictures were on the internet of babies lost so early. It would definitely help people to see these babies as what they are….babies!”

Jaelyn is right — babies in the womb at all ages and stages are human beings and deserve to be treated as such, with dignity, as Jaelyn and her family have. Children in the first trimester are amazingly complex and developed, as her photo clearly shows. A preborn baby Nielson’s age has a “completely formed” nose and lips, can make facial expressions, and his intestines are hard at work, “absorb[ing] water and glucose,” according to the Endowment for Human Development. Tooth buds are appearing, and the baby is growing fingernails — all of this while being only about 2.5 inches long and weighing about half an ounce.

8 Things You Don’t Need To Do After Giving Birth
2022-05-25 0 Comments
Everyone is supremely concerned about getting to the finish line of pregnancy. But no one talks about what happens after...
Tabbed Widget