Mother, 23, who feared she was infertile gave birth to QUINTUPLETS after taking medication to stimulate ovulation

A mother who feared she was infertile gave birth to quintuplets after taking medication to stimulate ovulation.

Hannah Merton, 23, from Akron, Ohio, turned to fertility mediation after struggling to conceive for six months and to her shock fell pregnant with five babies in October 2019.

Her children Philomena, Evangeline, Meredith, Gideon and Elliot were born prematurely at just 25 weeks weighing between 1lb 13oz and 1lb 4oz each, and had a tough early start.

The couple were devastated when their smallest baby, Meredith, died at just three days old, following a fatal brain bleed, while Gideon was kept in hospital for a year after suffering a collapsed lung.

However the babies have since been reunited and recently celebrated their second birthday, with Hannah insisting that despite the full-on job of looking after four young babies, she ‘wouldn’t change it for the world’. 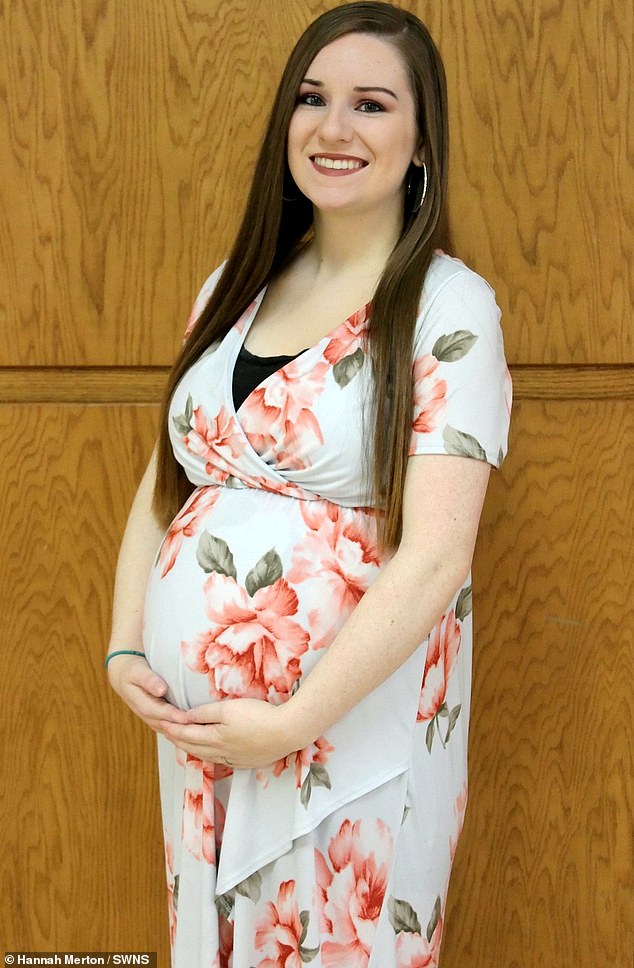 Stay-at-home mom Hannah said: ‘Having lots of children is scary, and it is crazy, but it is so much fun. I do have my hands full, that is true. But my heart is even fuller, I wouldn’t have it any other way.

‘I suffered from infertility so I took medication to help me ovulate, and it worked better than we expected.

‘We were told at the time I had a one per cent chance of having triplets – nobody mentioned the chance of four, never mind five babies because it was so low.

‘When I found out there were five I was in complete shock, and feeling every emotion you could possibly feel. 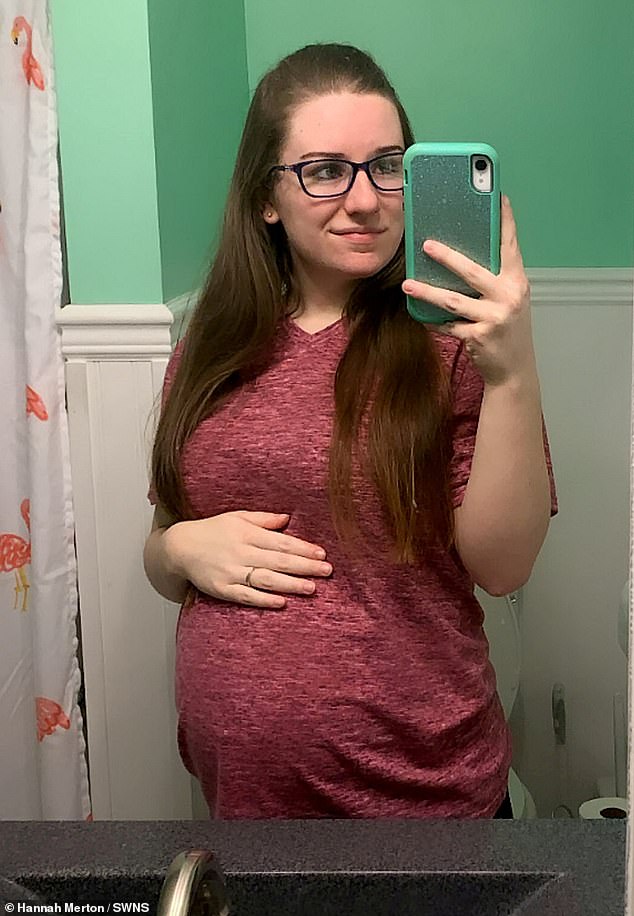 After struggling to conceive for six months, Hannah fell pregnant with five babies in October 2019. She is pictured in the hospital at 22 weeks pregnant 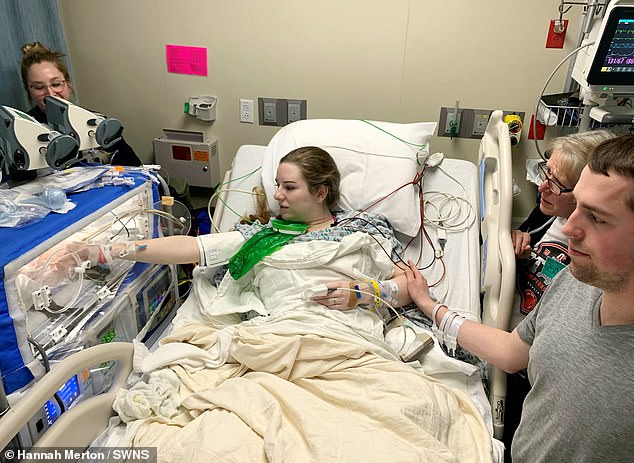 Hannah’s children Philomena, Evangeline, Meredith, Gideon and Elliot were born prematurely at just 25 weeks weighing between 1lb 13oz and 1lb 4oz each. She is pictured in the hospital after birth 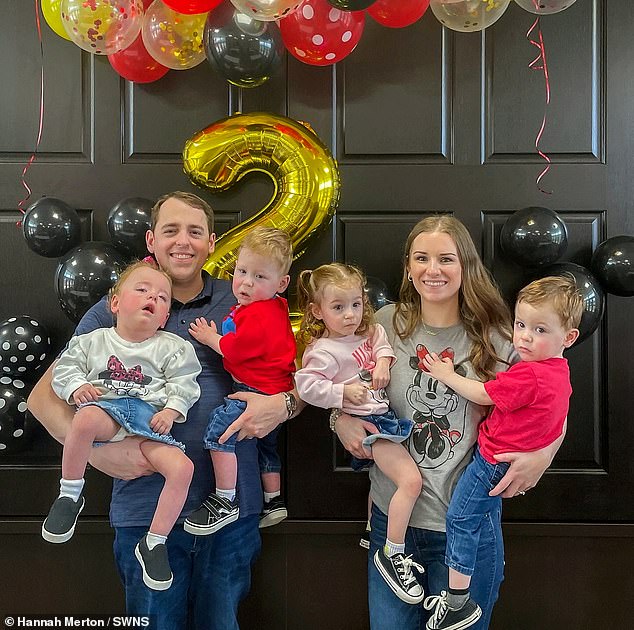 Hannah loves the job of looking after her four young children, who recently celebrated their second birthday (pictured)

‘Seeing them in the NICU was love at first sight but I couldn’t bear to leave them behind, so finally bringing them all home was an amazing feeling.

‘Having four babies to look after is very messy – I’m constantly cleaning – and it’s chaotic and crazy and loud.

‘People are always making comments that I “have my hands full” – and I do. But it’s so rewarding and so much fun, and I wouldn’t have it any other way.’

Hannah and Jacob, 24, a financial planner, began trying for a baby three years ago – but when she didn’t fall pregnant, she decided to take medication to encourage ovulation.

In October 2019, a pregnancy test came back positive – and later doctors confirmed Hannah was carrying not one, but five babies.

‘It was very shocking when I found out I had five babies,’ said Hannah. ‘I thought I was suffering with infertility. 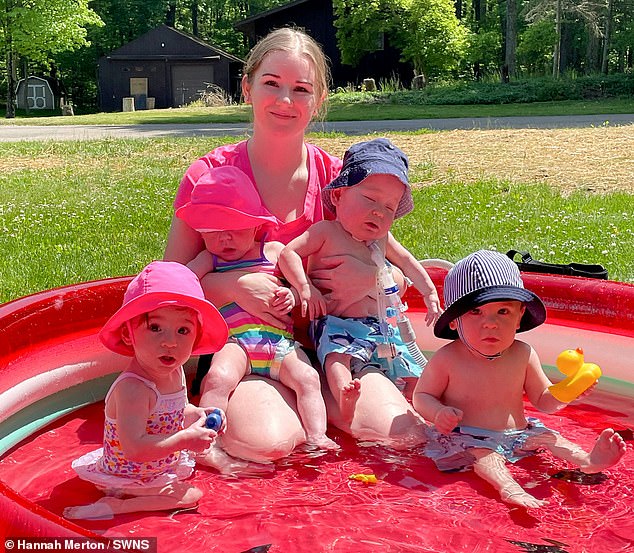 Gideon still has breathing problems and a tracheostomy and Evangeline has cerebral palsy. The siblings are pictured playing in a paddling pool in their garden after all five returned home from hospital 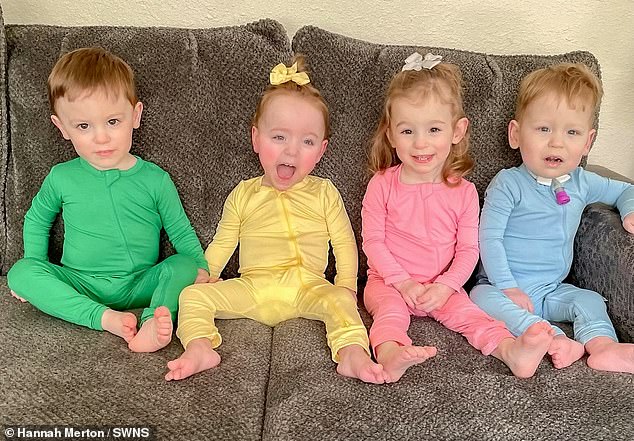 Philomena, Evangeline, Meredith and Gideon are pictured at home when they were reunited after a year due to Gideon’s treatment in the hospital 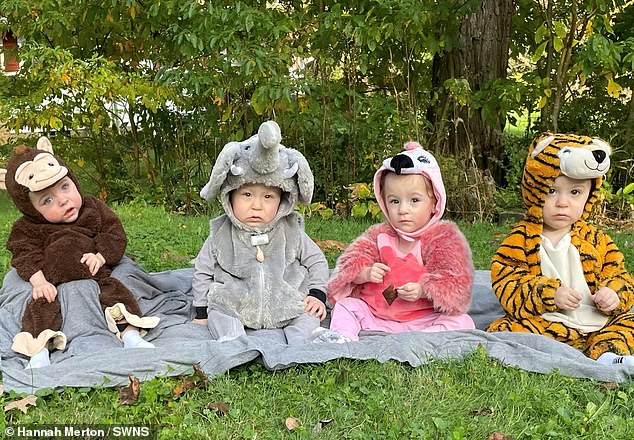 Hannah said of looking after her four tots, pictured dressed up in animal costumes in their back garden: ‘It’s pretty much go-go-go every day – crazy, chaotic and loud. It’s very messy, I’m cleaning my house non-stop’

‘We’d been told the chance of triplets was one per cent and we thought anything more than that would be virtually impossible.’

Hannah was just five weeks into her pregnancy when she first was able to see her five babies on a scan.

The five babies were delivered by Cesarean section 15 weeks premature after doctors became concerned for their health.

The babies were so tiny – each one less than 2lbs – and Hannah said they could fit in the palm of her hand. All of the children were placed under intense medical treatment to keep them alive.

Hannah said: ‘When I first saw them all, I was shocked, terrified and excited all at the same time. It was love at first sight but so scary seeing them attached to so many different tubes and monitors and wires.’ 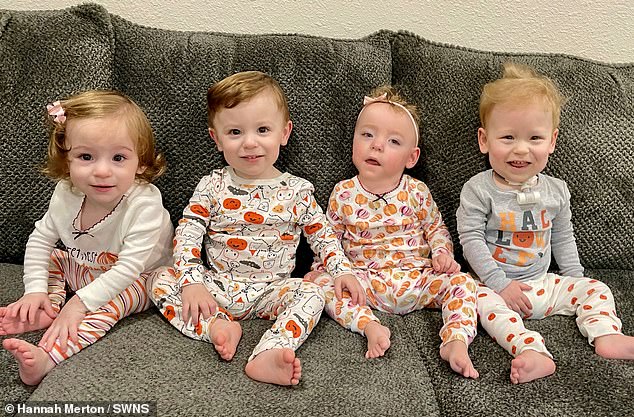 Philomena, Evangeline, Meredith and Gideon – all of whom recently celebrated their second birthday – are pictured posing for a photo at their home in Ohio 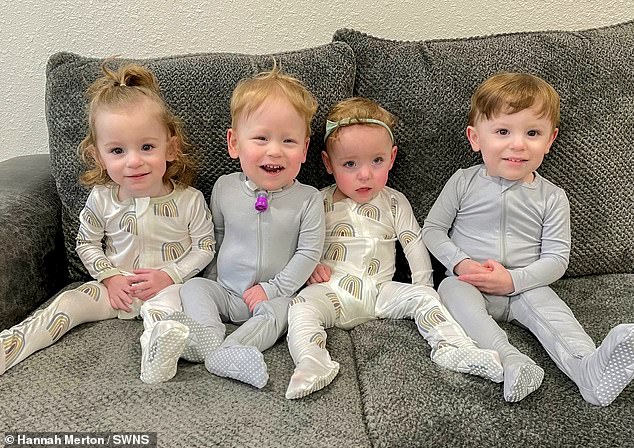 Philomena, Evangeline, Meredith and Gideon are pictured together at home after spending varying lengths of time in NICU following a premature birth

Tragically, the first-time parents had to say goodbye to one of their daughters, Meredith, at just three days old following a fatal brain bleed which likely occurred during her birth.

The remaining four tiny babies – Philomena, Evangeline, Gideon and Elliot – had to spend varying lengths of time in NICU because they were too small and weak to go home.

Hannah and Jacob visited the tots in hospital every day as they fought to live – with Gideon suffering a collapsed lung and spending a long time on a ventilator.

By five months old, Philomena, Evangeline and Elliot had made it home, but Gideon remained in hospital.

He was unable to properly meet his siblings until he was a year old, when he finally grew strong enough to go home although remained on a ventilator. 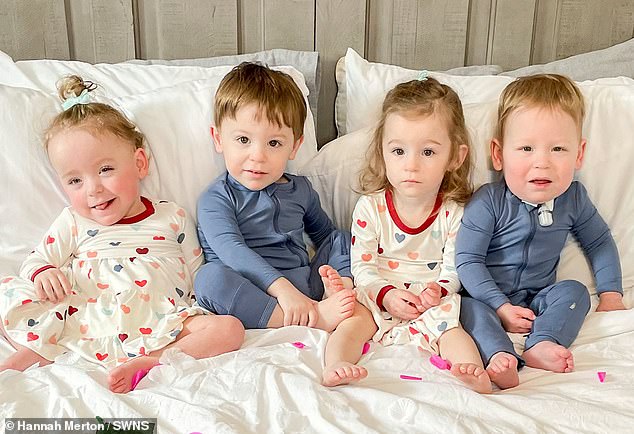 The parents keep organised thanks to a strict home schedule revealing all of their kids (pictured together at home) have naps, mealtimes and bath time occur at the same time each day.

On March 25th, 2021, Gideon was finally reunited with his siblings at home.

Hannah said: ‘Bringing them home was amazing but scary, it was the first time each of them had not been hooked up to monitors.

‘Suddenly not being able to see their heart rate and oxygen levels was nerve-wracking, but also exciting. It was the first time that we were the ones properly taking care of them.’

Since getting all four of the babies back home, Hannah and Jacob discovered the reality of looking after four tots at once.

It was made more of a challenge by the pandemic which left them with less support than they would have had.

Gideon still has breathing problems and a tracheostomy and Evangeline has cerebral palsy. But the young parents have taken every challenge in their stride. 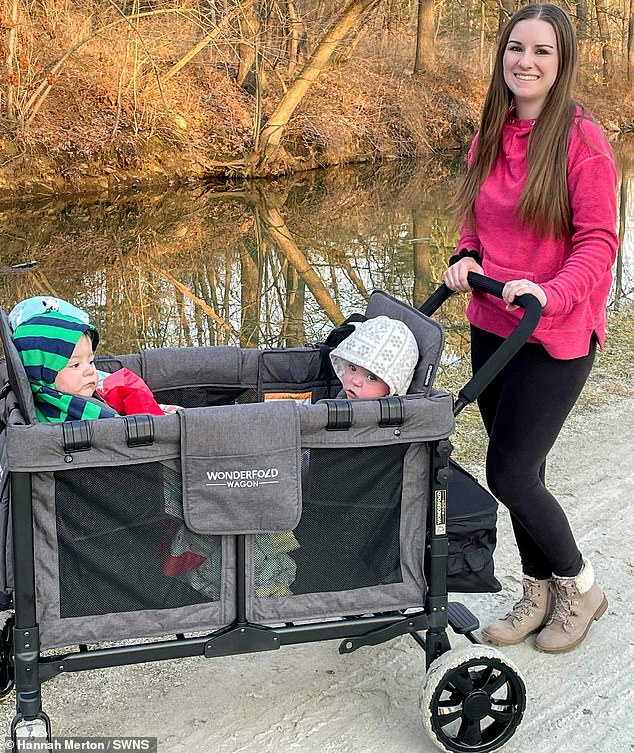 ‘I clean one mess then turn around and there’s another one appeared just behind me. But I like it that way – I grew up in a big family too – I was one of eight children.’

The two girls, Evangeline and Philomela, share one bedroom while the boys, Elliot and Gideon, share another.

The parents keep organised thanks to a strict home schedule – naps, mealtimes and bath time occur at the same time each day.

Elliot and Philomena are both now on their feet and have learnt to walk and climb – making the parents’ job that much more chaotic.

Hannah said: ‘There are definitely times each day where I think, “How in the world am I going to do this?”. But I don’t have another choice – stuff has to get done, so we get on with it.’

But Hannah says she wouldn’t change a thing and that she and Jacob would even consider one day having another child one day.

Couple Has 3 Sets of Twins All Born On The Same Day: ‘What Are the Odds?
2022-10-18 0 Comments
When Carrie and Craig Kosinski adopted their first set of twins just months after marrying, the Wisconsin couple never imagined they’d eventually...

10 Ways To Boost Your Baby’s Intelligence Levels
2022-06-01 0 Comments
Raising an intelligent child is every parent’s dream. Mumma’s joy has no bounds when the little Einstein utters his first...

See this amazing twin birth – and the moment adorable way their baby big brother comforted mum!
2022-08-16 0 Comments
The touching sᴄᴇɴᴇ that photographer Hailey McNeal took of a young mother welcoming twin sons into the world has been...