A “miracle” baby, born in Australia, with a tumour weighing twice as much as she did, is now thriving.

Baby Saylor Thomson was born with a rare tumour growing on her tail bone that affects about 1 in every 40,000 live births. She weighed just over a kilogram but her tumour was almost twice that weight.

At her mother’s 20-week scan, the tumour was discovered and her parents were told that their daughter had a 25-40% chance of survival.

Baby Saylor was born three months early, and just minutes later, a team of 25 doctors and nurses began an operation to remove the sacrococcygeal teratoma from her tailbone. The operation took six hours. 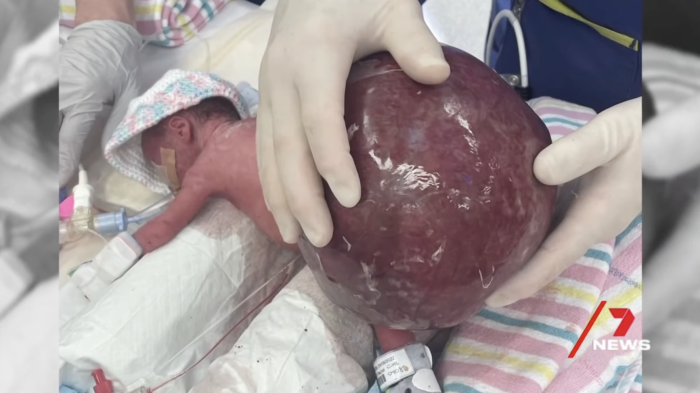 Professor Saliesh Kumar from the Mater maternal foetal medicine unit, who assisted in Saylor’s delivery, said that it was the largest tumour he had ever removed from such a small baby.

He said “We don’t know why the tumour grows, but it arises from embryonic germ cells and is four times more likely to occur in female infants”.

“Saylor’s tumour was extremely large and very complex. The tumour extended into her pelvis and abdomen”.

“Many of these babies do not survive the pregnancy … These tumours function like a large vascular shunt causing a lot of blood to return to the heart. In some babies … heart failure occurs”.

Her mother Rachel described Saylor as a “strong-willed little fighter”.

“When the social worker and surgeons first gathered to tell us she had little chance of making it due to prematurity and the tumour, I cried hysterically”, Rachel said.

Rachel was finally able to hold her daughter after ten days.

“But being able to hold Saylor in my arms and know she has come through the other side is something special”.

Saylor, the “miracle baby”, is now going from “strength to strength” and is almost three times her birth weight.

Prospects for premature babies are improving

Outcomes for premature babies are improving all the time. Earlier this year, John Wyatt, Professor of Ethics and Perinatology at University College London and also Emeritus Professor of Neonatal Paediatrics, Ethics & Perinatology at University College London, presented evidence to parliamentarians from the UK and across the world “that there has been a steady improvement in the chances of survival of babies born at 22 and 23 weeks gestation since the Abortion Act was last amended [in 1990]”.

Right To Life UK spokesperson Catherine Robinson said, “In the UK, if a child were discovered to have such a disability, he or she could be aborted up the point of birth. Stories like Saylor’s show that there is always hope though, and that whether or not a baby has a disability, they are still a baby, they are still human, and deserve our love and protection, not abortion”.

“As we celebrate these ‘little miracles’ on World Prematurity Day, the glaring inconsistency between the care that premature babies receive and the fact that babies at similar gestational ages can be aborted is clear for all to see. These little fighters are capable of overcoming the odds if they are given a chance. Sadly, abortion denies them this chance”.

Editor’s Note: This article was originally published at Right to Life UK and is reprinted here with permission.

Does Shaving Your Baby’s Head Promote Hair Growth
2022-06-06 0 Comments
Women are enough obsessed with hair – they want their babies to grow a head full of hair. Interestingly in...

Struggling Mom Gets Eye Rolls from Everyone on Plane as Her Twin Babies Scream—Then a Stranger’s Kindness Changes Everything
2022-05-20 0 Comments
To the woman on Delta flight 1227 on March 3, 2016, from Minneapolis to Detroit: You knew I needed you...