The brief earthly life of one beautiful little boy in North Carolina will have an outsized impact on generations to come.

Beckett Martin Weinert’s birth via emergency C-section on October 26, 2019, concluded mom Stephanie’s eighth pregnancy and marked her fifth live birth. Though Stephanie had multiple ultrasounds during her pregnancy for various reasons, none suggested any medical issues with her baby until a 38-week ultrasound showed no amniotic fluid and led to his emergent birth.

On the day she and Beckett expected to go home from the hospital, the pediatrician came in to do one last routine assessment on Beckett, and shocked Stephanie and her husband Peter with surprising news: their baby had some type of heart problem, and he had several markers for Down syndrome.

Instead of heading home, Stephanie and Beckett stayed so that Beckett could undergo a battery of tests. 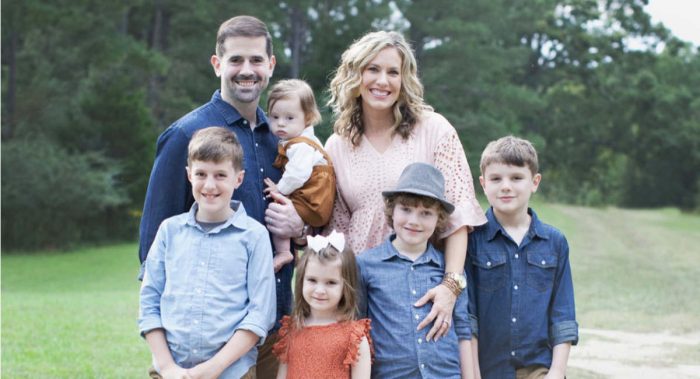 The Weinert family in 2020 (Photo courtesy of Stephanie Weinert)

The Weinerts would learn over the following weeks and months just how serious Beckett’s medical problems were. Their long-awaited, smiling son didn’t just have the significant heart issues that are typical of babies with Down syndrome. He also had advanced lung disease, meaning that his little body struggled mightily to tolerate the surgeries he needed to fix his heart.

And while Beckett had a somewhat medically calm first year of life, by his first birthday he required full-time oxygen through his nose along with other round-the-clock care. His progressively worsening lung disease led to a prolonged hospital stay at 18 months old in April of 2021.

Throughout young Beckett’s life, the Weinerts had purposefully shared “the raw and the real” joys and challenges of their everyday journey with him on Instagram. In the same way, they also intentionally chose to allow the world into their time of deepest suffering as his health rapidly declined over the following weeks.

It’s okay to acknowledge our fears around special needs parenting

In the year since Beckett’s death, the Weinert family has been consoled by countless stories of the ways their son’s life changed other lives. Stephanie spoke to Live Action News about Beckett’s impact and how to show support for families with special needs. She also noted her response when people say “I could never be as brave as you” or “I could never do what you did.”

Stephanie said, “We all know that our percentage of having a child with special needs goes up as our age goes up, but I don’t think we talk about in public like we should the fears that we have about that happening… we’re ashamed to have those back-of-the-mind thoughts — ‘please, just let me get through that 20-week-ultrasound.’ I can’t tell you how many times I’ve thought ‘as long as he’s healthy, that’s all that matters.’”

She acknowledged, “Yes, it’s so hard to parent special needs and to welcome special needs into a family that you already have. Everyone just learns and grows and suffers. And that’s a very real thing. But what we’re also able to show is the joy, the goodness, the beauty. And that’s something the world just doesn’t prepare you for or tell you about, when you’re hearing all the medical things that could go wrong with your child, or about what could happen if you get pregnant at 38 or 42.”

Beckett’s witness leads to babies born and openness to adoption

Stephanie continued, “We’ve had a lot of couples write us letters and say ‘we got married at 38’ or ‘We got married in our early 40s, and we thought we were not going to try to have any children because we knew our chances of having Down syndrome or another disability or illness were so high. But we have reconsidered this for our family because of Beckett.’”

Additionally, she noted, “there have been many families who have felt called to adopt a baby with Down syndrome after getting to know Beckett. That is one of the most moving things for me, especially after losing him, to receive these notes… from couples who are open to adoption but would not have considered Down syndrome before knowing Beckett. He showed the good side and led a lot of couples to say, ‘we could do that. The Lord could come into our story, too.’”

While she understands where that fear comes from, and indeed felt it many times herself, Stephanie clarified unequivocally, “that is a lie from the evil one.” Thanks to Beckett, she and her family have found instead “that God equips us with the grace for whatever circumstances and situations and crosses that we need to carry. And the grace never comes beforehand. It comes after you step out, you take that first step, and you’re already along the journey.”

How to support families raising a child with special needs

Stephanie observed that “because of the tragedy of abortion, most of the sweet little souls with special needs are not here. That is a reality in our world, and that is a loss to us, that we don’t have these daily encounters with these beautiful souls. It’s not an everyday occurrence to go to the grocery store or the playground and have many special needs children there to see and to come up randomly and hug you.” Because “in some ways, they are a mystery to us, a lot of us are afraid. We’re afraid to go up to the special needs mom and say ‘how are you doing? How can I pray for you? You’re doing a great job.’”

Rather than worrying about what to say, oftentimes the most helpful thing people can offer is a listening ear. “Maybe that mom just needs a safe place to vent, a safe place to tell you how it’s really going. Maybe your job is to listen. Just showing up with an open heart does a lot for special needs moms, because in many ways it’s lonely.” She emphasized, “Just showing up is a beautiful, beautiful gift to a special needs mom.”

What Are The Benefits Of Delayed Cord Clamping
2022-07-08 0 Comments
When a baby is born, the ᴜᴍʙɪʟɪᴄᴀʟ cord is no longer needed and is clamped and cut immediately after birth....

I’ve put on weight since I last dated. How can I build my confidence and establish a new dating life?
2022-05-09 0 Comments
Real attractiveness comes from more than how a person looks, writes advice columnist Eleanor Gordon-Smith. Remember to apply this knowledge to...