When expecting mom Kristen saw our post about newborn babies showing off how they fit in the womb she just had to share a picture of her daughter Emma. Unlike the little ones we previously featured, her baby girl had been in the womb in the breech position with her feet up next to her ears!

Take a look at the photo the Massachusetts resident shared on our MotheringDiary Facebook page with this message: “This was my poor little breech baby! She came out folded in half!!” 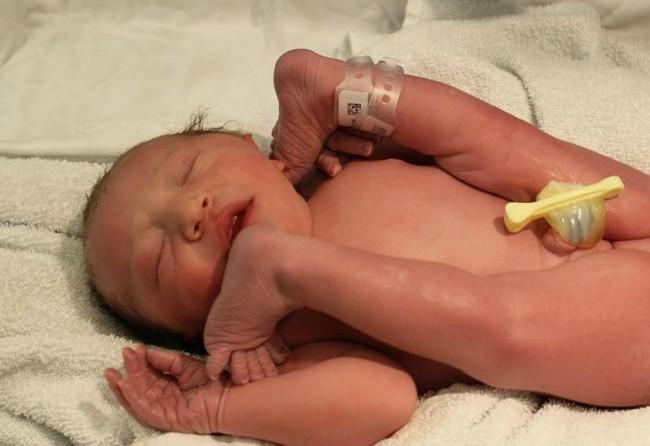 Amazed by the photo, I reached out to Kristen to hear a little more about the arrival of her and husband Matthew’s first child.

“When I was pregnant with Emma, I had what I like to refer to as a ‘dream pregnancy,'” she explained to BabyCenter. “I was never sick, tired, or all that uncomfortable. I just adored being pregnant! Much to my surprise, around 34 weeks I was in for a routine appointment and asked if we could take a sneak peak (by ultrasound) and discovered I had low fluid and a breech baby girl!

“I tried everything from ‘Spinning Babies’ to acupuncture to get her to turn. No such luck. My doctor then scheduled a c-section for 39 weeks. Fortunately, the c-section and the recovery went very smoothly and I had a healthy baby in my arms!”

What happened next came as a surprise.

“Immediately after taking Emma from my belly, my husband had our ‘fancy’ camera ready to go,” Kristen went on to explain. “He got the crazy shot that I now have framed in my living room. Never have I seen a baby that was literally folded in half. The doctors said she seemed fine but that we would have to soon see a specialist at Mass General Hospital to examine her hips to make sure there was no hip dysplasia.”

Thankfully, the little girl, who is now 2, had no such issues.

Kristen can’t quite remember how long Emma was fond of keeping her legs in the breech position, but believes it was just shy of two months before their little one wanted to stretch out.

“Every time we changed her diaper, we would have to hold her legs down,” the woman who is currently expecting baby two explained. “She loved sleeping in a bassinet and was always very comfy in there.”

Reflecting on her pregnancy she added, “I feel so bad that my sweet girl was stuck in what I would think of as such an uncomfortable position while growing and developing in my belly. But she is a very happy and healthy girl now!”

Kristen, who is currently 23 weeks along with a boy, worries about having another breech baby, but if she’s able to, she plans to have a VBAC (vaginal birth after cesarean).

Many thanks to Kristen for sharing her family’s story with us, and fingers crossed baby boy will cooperate!

Baby has complex surgery 8 days after birth for ‘almost uniformly fatal’ heart condition
2022-12-09 0 Comments
During an ultrasound when she was four months pregnant, Jasmine Matthews learned that her preborn baby had a heart condition that was...